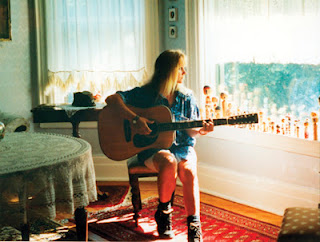 Born on February 2, 1963,  when she was nine, her father taught Eva to play the guitar and she began to play and sing at family gatherings. At 11, Eva began singing and playing guitar in a band called Easy Street. But due to her shyness, she struggled with performing in front of strangers.
Throughout the 1980s, she worked with several other bands and as well as wok ring as a propagator at a plant nursery and as a furniture painter. In her free time, she explored other artistic expressions including painting, sculpting and jewelry design.
After working with various bands, in 1993, she was honored by the Washington Area Music Association with a Wammie award for the Vocalist Jazz/Traditional category. The next year she was invited to perform at the event and chose to sing "Over the Rainbow". A Washington Times review of the event called her performance "a show-stopper". (Her's is still the only version of that song that I like to listen to.) She took home two Wammies that night, again for Vocalist Jazz/Traditional and also for Roots Rock/Traditional R&B
In 1993, Eva had a malignant mole removed from her back. Three years later, during a promotional event for her album Live at Blues Alley album in July 1996, she noticed an ache in her hips, which she attributed to stiffness from painting murals while perched atop a stepladder. The pain persisted and a few weeks later, X-rays revealed that the melanoma had spread to her lungs and bones. Her doctors estimated she had three to five months to live.
Eva opted for aggressive treatment, but her health deteriorated rapidly. In the early fall, at a benefit concert for her at the Bayou, she made her final public appearance, closing the set with "What a Wonderful World" in front of an audience of friends, fans and family.
Additional chemotherapy was ineffective, and within six weeks she had died
After Eva's death, local folk singer Grace Griffith introduced her last recording to Bill Straw from her label, Blix Street Records. Straw approached the Cassidy family to put together a new album. In 1998, a compilation of tracks from Cassidy's three released recordings was assembled into the CD Songbird.
This CD lingered in relative obscurity for two years until being given airplay by Terry Wogan on his wide-reaching BBC Radio 2 show in the UK, Wake Up to Wogan, following recommendation by his producer Paul Walters. The album sold more than 100,000 copies in the following months. The New York Times spoke of her "silken soprano voice with a wide and seemingly effortless range, unerring pitch and a gift for phrasing that at times was heart-stoppingly eloquent."
Before Christmas of 2000, in the UK, Top Of The Pops 2 aired a video of Cassidy performing "Over the Rainbow", which resulted in Songbird climbing steadily up the UK charts over the next few weeks. Just as ITV's Tonight with Trevor McDonald aired a feature on Cassidy, the album topped the chart. Shot at Blues Alley by a friend with a camcorder the same night her last album was recorded, the video became the most requested video ever shown on Top Of The Pops 2.
"There's an undeniable emotional appeal in hearing an artist who you know died in obscurity singing a song about hope and a mystical world beyond everyday life", wrote The Guardian.
Here just for you, this first day of Autumn, is Eva Cassidy singing Autumn leaves;

Wendy Mason is a career coach.  She helps people reach their goals and aspirations, without sacrificing their home and personal life.  Before working as a coach, Wendy had a long career in both the public and private sectors in general management and consultancy as well as spells in HR.  She now divides her time between coaching and writing. You can contact Wendy at wendymason@wisewolfcoaching.com and find out more at http://wisewolfcoaching.com