Now I've grown lemon balm in my garden for years and always enjoyed the smell. On a summer's day, it is something quite special. But only this year have I taken a couple of fresh sprigs, steeped them in hot water and drunk the results.

Oh, it is lovely.

Apparently, the word Balm is an abbreviation of Balsam, the chief of sweet-smelling oils. It is so called from its honeyed sweetness It was highly esteemed by Paracelsus a sixteenth century alchemist of genius. He believed in its ability to revive.

Paracelsus, as Manly Hall has said, gained his knowledge "not from long-coated pedagogues but from dervishes in Constantinople, witches, gypsies, and sorcerers, who invoked spirits and captured the rays of the celestial bodies in dew; of whom it is said that he cured the incurable, gave sight to the blind, cleansed the leper, and even raised the dead, and whose memory could turn aside the plague."

So clearly someone worth listening to.

The London Dispensary (1696) says: 'An essence of Balm, given in Canary wine, every morning will renew youth, strengthen the brain, relieve languishing nature and prevent baldness.'

John Evelyn wrote: 'Balm is sovereign for the brain, strengthening the memory and powerfully chasing away melancholy.' Balm steeped in wine we are told again, 'comforts the heart and driveth away melancholy and sadness.'

In olden days,  a spirit of Balm, combined with lemon-peel, nutmeg and angelica root, enjoyed a great reputation under the name of Carmelite water, being deemed highly useful against nervous headache and neuralgic affections. 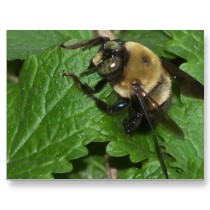 Gerard wrote: 'It is profitably planted where bees are kept. The hives of bees being rubbed with the leaves of balm, cause the bees to keep together, and cause others to come with them.' And again quoting Pliny, 'When they are strayed away, they do find their way home by it.'

The leaves of balm applied externally, have been considered to be a cure for the bites of venomous beasts and the stings of scorpions. It has certainly long been recognized that balsamic oils of aromatic plants make excellent surgical dressings.

The Greek name for lemon balm is Melissa officinalis.  The name Melissa is from the Greek word signifying 'bee,' which reflects the attraction the flowers have for those insects because of the honey they produce from it.

Lemon balm is often used as a flavouring in ice cream and herbal teas, both hot and iced, often in combination with other herbs such as spearmint. It can be paired with fruit dishes, used in fish dishes and is the key ingredient in lemon balm pesto.

The crushed leaves, when rubbed on the skin, are said to be a repellant for mosquitoes. Lemon balm is also claimed to have antibacterial and antiviral properties.

At least one study is said to have found it to be effective at reducing stress and there are claims that it may have a role in the treatment of Alzheimers
Now, I'm not a doctor and I have not seen the proof of any of these claims. But I do know that on a lovely, hot afternoon in May it makes a dreamy and refreshing drink. I do recommend you grow it, for its scent if nothing else – although if it likes you it will spread a little too quickly.

So now I'm off to make my lemon balm tea.