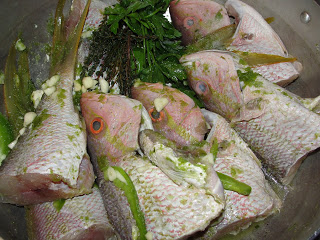 Something lovely from Cooking The Haitian Way

"Poisson "Gros Sel" is a succulent Haitian dish, and easy to make. I like to use red snapper, although other people might use catfish, tilapia. The first thing in "cooking the Haitian way" is to clean your fish well. In Haiti, we take great pride in cooking, so we make sure the end result is perfect. If you were to cook, and forgot to remove the genitals part of the fish, nobody will eat the fish. Basically, cleaning the fish is top priority. I am going to show you on the video How to clean Fish The Haitian Way. Then, I am going to show you how to marinate it. Last, but not least how to cook it.

After cleaning the fish, and removing the gills, pour some lime juice on it to remove the fishy smell. Let it sit on the side for about five to ten minutes while you are preparing the ingredients. Then rinse the fish, and remove the acidity we used to clean the fish. If you get my Grandma's Marinating Sauce (Haitian marinade (garlic, green onion, parsley)), then you could use that extra five to ten minutes for something else. It's the perfect seasoning for this recipe. Feel free to use your regular fish seasoning, just make sure it's not overpowering. I like to add some texture on my cooking, so on the video, I added some parsley, thyme, butter, garlic, lime juice, and salt. The Grandma's sauce has all those natural ingredients, and it also has onions that you would need to make the sauce. The Grandma's sauce makes cooking easy for anyone even if you are not a great cook. Simply because you won't need to be thinking about the ingredients that you would need to spice up your food.

When you are cooking the fish, pour some oil in the pan and place the fish in there. Put aside the marinating sauce that you used to season the fish. This step will help seal all the marinating juice from the fish. After five minutes, add the marinating sauce with the other ingredients (parsley, thyme, butter, garlic). Just let it boil for 25 minutes, then taste it, and add a cup of water. If you want more sauce make sure everything is balanced out as far as salt and acidity. If you add more water, then you would need to add a little bit more salt and a little bit more lime juice.

The best part of cooking is to do it with love!"

Ingredients and Method Below

Broth
Prepare a court bouillon with water, a chili pepper, celery stalks, onion and bell pepper cut into strips, green onions and lemon juice. Bring to a boil, add a half cup of butter and cook the fish (do not forget to add the marinade) for about 10 minutes.

Once cooked, remove the fish and put in a serving dish.

Fry the chopped shallots with the remaining butter. Add about one to two cups of broth and simmer a bit. Just before serving spread this sauce over the fish.

Wendy Mason is a career coach.  She helps people reach their goals and aspirations, without sacrificing their home and personal life.  Before working as a coach, Wendy had a long career in both the public and private sectors in general management and consultancy as well as spells in HR.  She now divides her time between coaching and writing. You can contact Wendy at wendymason@wisewolfcoaching.com and find out more at http://wisewolfcoaching.com

I am very grateful for your comment. Thank you! 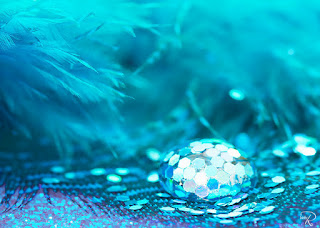