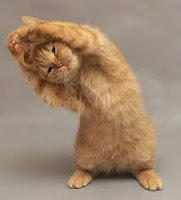 Today's post is from contributor - Natasha Gelder. Natasha is a full time Literature student based in Leeds who is juggling the quests for higher education, money and rock hard abs. She believes exercising is a vital part of a healthy, balanced lifestyle and should not be seen as a chore.

Over the last couple of months I have started experimenting with Yoga. I have been a fan of Pilates for a while now so I thought I would branch out and see what all the fuss was about. Many people dismiss yoga as an easy option and claim that it is not a ‘proper’ workout due to its lack of high intensity cardiovascular activity. Many people assume it is entirely made up of the meditation and breathing techniques that are part and parcel of Yoga. Although these techniques are a crucial part of the practice, there are many more elements involved.

The large focus on breathing exercises may be deemed as ‘pointless’, but the techniques enable you to synchronise your breathing to the movements that your body is making, allowing you to develop a better awareness of your body itself. This can then be transferrable to other exercises, particularly cardiovascular exercises such as running or rowing, to ensure you keep your body oxygenised through your workout. Arguably the two most important things during exercise are focusing on your breathing and stretching to avoid injury; Yoga is a combination of both these things.

A lot of the beginner Yoga moves are relatively easy, but they are still useful as they present you with the opportunity to stretch out muscles properly and open up entire muscle groups, resulting in better posture and beautiful lean muscles. Some of the intermediate Yoga moves are difficult, as are basically all of the advanced moves. These focus on strength and flexibility and are extremely challenging. Again, developing your strength and flexibility are both things which can be transferred to other sports or forms of exercising, leading to all round athletic improvement. The suggestion that Yoga is easy becomes completely discredited at the advanced point, unless of course, balancing on your head for a couple of minutes with your entire body in a straight line is easy? No, I didn’t think so.

There are many varieties of Yoga, with some being more vigorous than others; all these different types have their own health benefits. With less vigorous forms of Yoga, certain poses have been derived specifically to aid certain ailments, with back pain being a common example of something that Yoga can help ease. Less vigorous forms of Yoga are also used as a common way to ease Rheumatoid Arthritis due to the gentle stretching that is involved in the practice.  Heart disease and high blood pressure can also be helped through frequent Yoga sessions, as can ‘invisible illnesses’ such as depression.  Even if you are a perfectly healthy person with no health issues whatsoever, Yoga can help diminish high stress levels, something which we are all susceptible to at one point or another.