Showing posts with the label First World War
Show All 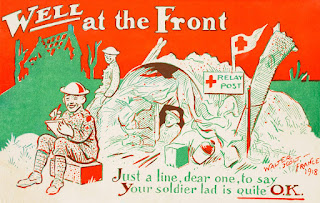 This poem on my Dreaming in Purple and Grey poetry site. It was written in remembrance for the 100 years' anniversary of the First World War armistice.  You can find it at this link . I wanted this poem to sound like a nursery rhyme despite the gruesomeness. For us growing up in the fifties, the First World War was not very far away. My Grandad was a wagonner when the war began. He was called up with his horses. My Mum could remember those horses being dressed in horse ribbons to be paraded through the village before they made their journey to France. Grandad drove a water wagon at the start of the war and a water truck by the end. I don't know what happened to the horses. I know he lost a brother and, I believe, a brother-in-law, on the Somme. All they told us kids about his experiences in the war was about the lack of clean clothing. And, how each night in the trenches, Grandad and the other soldiers would kill the lice in their vests by running a candle flame up the seams. E
Post a Comment
Read more
More posts