Showing posts with the label Tuatha Dé Danann
Show All

Come Visit The Land Of Fairy - It's Not What You Think! 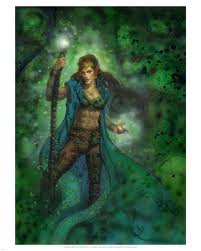 Come Visit The Land Of Fairy - It's Not What You Think! A little distraction for you! The word fairy derives from Middle English faierie, a direct borrowing from Old French faerie meaning the land of the legendary people of folklore and romance called (in Old French) faie.  Although in modern culture they are often depicted as young, small, beautiful, gentle and good-natured, originally they were quite different. They were sometimes tall, handsome, angelic beings and sometimes short, wizened trolls.  Tiny fairies of one kind or another have been recorded for centuries but even in this form how they apeared was not constant. And their good nature could not be relied upon.   Fairies were always powerful, magic and dangerous - i n some folklore they were known to use their teeth on those they met. Next time you go out to the woods, carry a piece of bread in your pocket just in case. I was brought up on stories of fairies - from Celtic mythology  (the wonderful  sidhe
Post a Comment
Read more
More posts