Showing posts with the label Philipino Escabeche
Show All 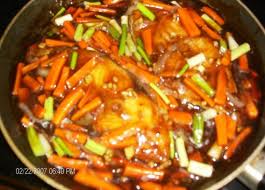 Friday Fish Recipe - Philipino Escabeche (Pickled Fried Fish) Escabeche is a typical Mediterranean cuisine which refers to a dish of either poached or fried fish (escabeche of chicken, rabbit or pork is common in Spain) marinated in an acidic mixture before serving, and to the marinade itself.  The dish is common in Spain and Latin America, and popular in Catalonia, Portugal, Provence and the Philippines. Influences of the dish appear as far as Asia-Pacific with adjustments to local food staples. It is usually served cold after marinating in a refrigerator overnight or longer. The acid in the marinade is usually vinegar, but can also include citrus juice.  Escabeche is a popular presentation of canned or potted preserved fish, such as tuna, bonito or sardines. In the New World, versions of the basic marinade are often used with other foods than fish and meats, for example green bananas and chicken gizzards (Puerto Rico), jalapeño peppers (Mexico), etc.  The origin of
Post a Comment
Read more
More posts