Showing posts with the label healthy relationships
Show All 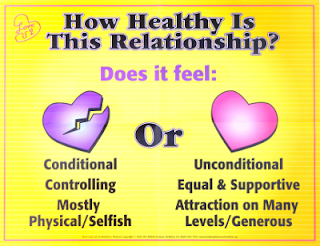 Healthy Teen Relationships Relationship violence is a highly under-reported phenomenon. Teens are often reluctant to talk about violence that may be occurring in their relationship because they associate it with love. Prevalence of teen dating violence has been estimated as low as 9% and as high as 57%. The most highly reported statistic is that 1 in 3 teens will experience some form of abuse in a dating relationship. This video is public service announcement which was created for parents of teens to raise awareness about teen dating violence. Teens in dating relationships can experience issues with power and control. These may be in the form of hitting, slapping, pushing, verbal insults, or more subtle forms of intimidation like controlling behaviors such as the text messages shown in the video. Patterns of controlling behavior can highly influence an individual's health. Among today's tech-savvy teens, text messages are a primary form of communication, that pa
Post a Comment
Read more
More posts