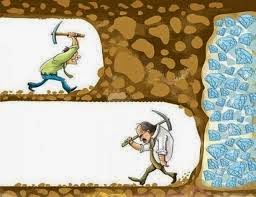 If you have to fight for something you have no reason to give up.

Here is another inspirational post from contributor, Stephanie Carfrae. She is a Creative Writing Graduate; you can find her own blog at www.stephcarfrae.blogspot.co.uk and I think you will be inspired by Steph's videos on YouTube at http://www.youtube.com/channel/UCkoz1yev_apPjE8XcVrjyjA/videos

When the referee blows the full time whistle you have my permission to give up.

My point is no one has a referee with a whistle to blow full time in this life. Everyone has highs, everyone has lows. Who are you to think your lows are worse than anyone else’s?

Of course good things come to an end, and they have to so you can learn to appreciate them. The good times account for memories: sometimes that’s the best part of being alive because you know that things can only get better.

Of course there will be moments of heart ache and you will go through hard times, but just hold onto the belief that if the past good times have been that good the hard times will get better. Though at times, when fighting for something, you cannot see the light at the end of the tunnel you just have to keep going because it will be out there. Somewhere.

You can’t change the events that go on in someone else’s life. Even though you might want to, particularly when you care so much about someone you just want their pain so that they don’t have to face it. But life doesn't work that way. While you can always be relied upon for moral support, oftentimes there is nothing you can do when life plays out such catastrophes. And that is painful.

Just know that you have the biggest heart and someday that will be noticed, if it hasn't already.

Sometimes there’s nothing you can do. It is hard, but that’s the way life is.

For years I blamed myself for an episode that happened when I was eleven. I kept thinking if I hadn't done things in the way I did, the bad events that occurred may not have happened.

Just as with my previous point, you can’t control other people’s reactions. Just because it’s not the way you would react, doesn't mean it’s wrong. People are different. Something that’s natural for you may not be for someone else.

You are not in charge of everyone. The only person you are accountable for is YOU. People who rely on you (kids/friends etc.) are individuals themselves and need the chance to be able to make mistakes so that they can set them right. Not you.

Imagine if you were wrapped in cotton wool all your life, without being able to make a single mistake or live.

Mistakes are a part of living, and even the most composed, self-assured person has made a mistake in their past. Just because they’re not making them now, doesn't mean they haven’t.

It might takes a lot of tries to get to where you want to in life, but if you focus on ‘how to do it better next time’ it’s so much less time-consuming and much more positive than thinking about the amount of times you failed.

Stephanie Carfrae is a regular contributor. She is a Creative Writing Graduate; you can find her own blog at www.stephcarfrae.blogspot.co.uk and I think you will be inspired by Steph's videos on YouTube at http://www.youtube.com/channel/UCkoz1yev_apPjE8XcVrjyjA/videos